The latest survey by the Federation of Builders (FMB) among medium-sized construction companies showed that the shortage of skilled workers is worsening with increasing activity.

40% of the FMB members surveyed stated that the workload increased in the second quarter of 2014. Only 14% saw a decline. This positive balance of +26 percentage points is above a balance of +17 points in the first quarterly survey. This was the fifth consecutive quarter with a positive net balance.

Further increases are expected. In the first quarter, the balance of companies that expect business to grow minus those that expect to decline was +29 points. This has now risen to +34.

A side effect is that skilled workers are becoming increasingly scarce. Plasterers, site managers and site managers are hard to find, as is bricklayers, who are still at the top of the “Most Wanted” list. Every fifth builder also struggles to recruit plant operators and construction workers. Scaffolding is still the least difficult job to find. 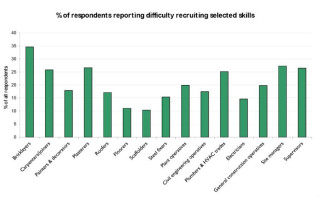 Brian Berry, CEO of FMB, said, “Over a third of SMBs in the construction industry tell us they are struggling to recruit the bricklayers they need to handle their workload. Plasterers are almost as hard to come by: 27% of companies state that they are hard to find these skilled craftsmen. The results are a strong warning that the government cannot take the recovery in construction for granted. While this snapshot of small construction companies marks the fifth quarter in a row with positive results, private and public projects across the board could stall if we don’t have enough people to complete the work. “

He added: “Looking ahead, SMEs in construction are still very concerned about the impact of reforms to government funding for training. If implemented as proposed, most micro-enterprises, which currently train two-thirds of all apprentices in construction, are likely to forego recruiting apprentices altogether. The CITB predicts that 182,000 new jobs will be created in the UK in the construction industry by 2018, so this is not the time to jeopardize the ability of small businesses to continue their proud apprenticeship history. Not only would it be catastrophic for the construction sector itself and the hundreds of thousands of young people currently looking for work, it would also be catastrophic for the economy as a whole, which is largely dependent on construction and housing to drive the recovery. “

Do you have a story Email to [email protected]

Lincoln businesses ‘thrilled’ that Christmas Market 2021 will return this December

Plastering | How to Plaster a Wall

How a small home refresh turned into six months of destruction, plastering and…

Man living in woods behind Tesco threatened to ‘karate…