Only Food and Courses, London: ‘Deserves to be taken seriously’ – restaurant review | Food

On the wall of the room this week’s restaurant is located, there is a sign that reads: “An ingeniously cheeky take on classic British food.” There’s a lot to unzip here, not least the second word; I’ll judge that and so on. Even before you get to this sign, you have to face the name of the restaurant. It’s just called food and courses. That’s a boss-level punishment right there, but almost excusable, I guess. The restaurant is located in Pop Brixton, the market for loose food and drink from converted shipping containers, just a few miles from Peckham, the setting of John Sullivan’s sitcom Only Fools and Horses. Got it? Of course you do.

Let’s stand back for a moment: a clever name; a cheeky twist; a shipping container. I can well imagine that certain people get really angry and insulted. At different times these people could well be me. In the face of cheeky twists and turns in the past, I’ve got over all of Charlton Heston at the end of the primordial planet of the apes and fell on my knees in despair in front of a broken Statue of Liberty. Although only metaphorically. With my hip problems, it can take me a while to get up.

“It is and is not”: shrimp cocktail. Photo: Sophia Evans / The Observer

The saving grace here, I think, is attitude. It’s impossible for Chef Robbie Lorraine and Manager Martyn Barrett, who is largely self-governing, to get too serious and straighten themselves up when their home is a shipping container. In another life it could easily have been part of an intestinal blockage in the Suez Canal. I look inside. It’s nicely done: clean, white tiles and an open kitchen in the back. But none of this obscures its true nature. Of course, when we visit it is only eating outside. On a raised wooden platform above the rest of Pop Brixton, there is room for a dozen of us just behind the doors. We eat from tables made of the purest board and are protected from the spring sunshine by thick, transparent plastic grids in the color of cooked sweets. The filtered light devastates my Instagram pictures.

In normal times they operate as a dinner club, offering six courses for just 14 people in two sessions for £ 65 per head. The menu changes monthly. As an emergency solution, they have put together a short menu of the day with just 10 dishes that continues: four starters, four main courses, two desserts. This means the bill can go up, but then it shows both serious attention to detail and hard work here. Just expect any dish description to be easily misleading and sometimes on purpose. 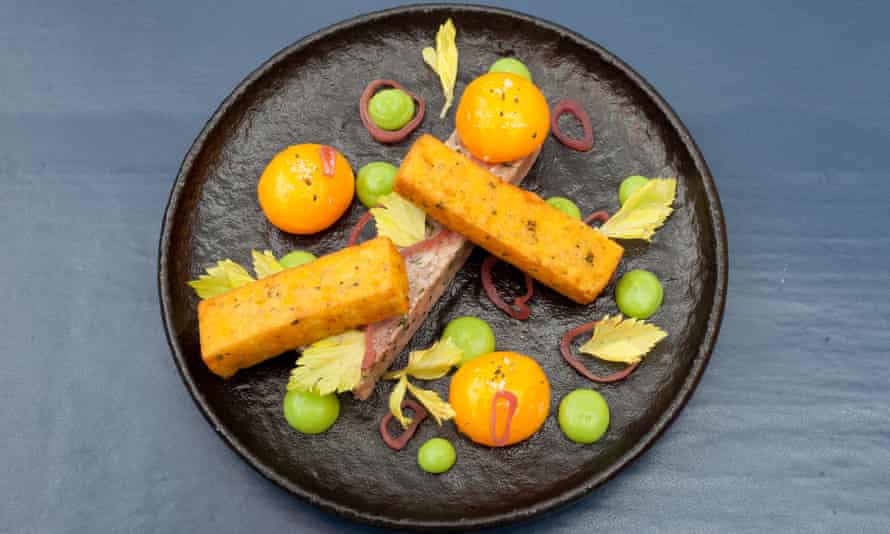 The business part of a Bloody Mary, for example, arrives in the form of a damp, fiery granita. The shards of ice look like something that has flaked off Superman’s Fortress of Solitude. Given the low freezing point of vodka, this is a good trick. It comes with long-roasted tomatoes, chickpea chips, and a dill oil that has been made into a powder through a bit of old-school Blumenthal-esque modernism. Not so much an annoying deconstruction as a reconfiguration. Ham, egg and fries has all of these things. Aside from the ham element being a compressed tangle of pork terrine, the eggs are just the cured yolk and there are more of those chickpea chips. Swirls of pea puree and rings of sweet pickled onions round off the plate. Ignore the title and what you have is a happy, well-executed dish.

And so to the shrimp cocktail, which is both and not. The Marie Rose Sauce was given through a nitrous oxide gun so that it sits in ventilated pillows around the shrimp. It’s littered with tiny clusters of balsamic vinegar, another old-school technique Ferran Adrià developed in El Bulli in the 90s when playing with your food like this was all the rage. There are ribbons with pickled cucumber and some charred lettuce. It is a prawn cocktail indeed, just not your prawn cocktail. Let’s end this round with slices of extremely good salmon with treacle topped with puffed wheat, fronds of green herbs and a jenga block of crème fraîche that has been formed into a jelly. 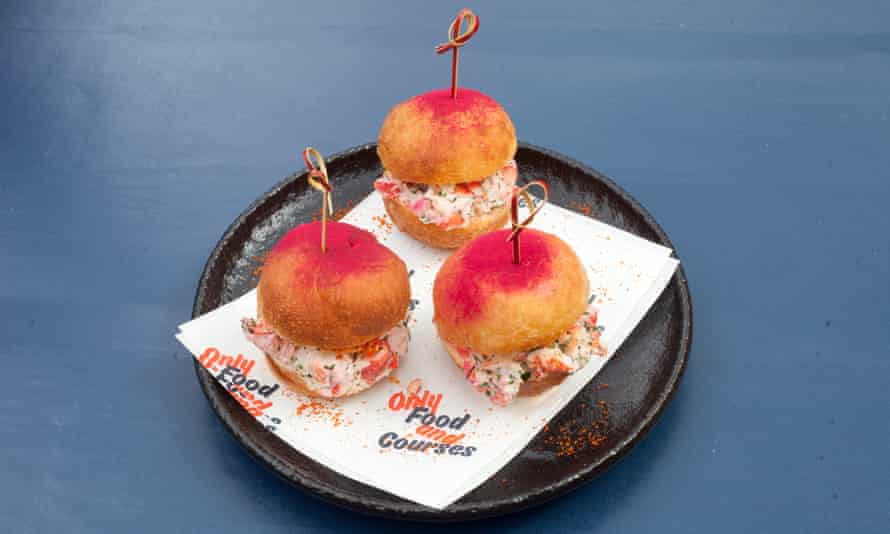 “Do I have to tell you that they are delicious?” Lobster donuts. Photo: Sophia Evans / The Observer

Our first main course, a smoked short rib hash, comes closest to a familiar dish and, as it is shaped into a tower, has a sweet nostalgia of the 90s: There is a base made of minced potatoes on which the long braised beef sits. Everything was soaked in a slowly reduced jus, the last drop of which I chase around the plate with fat finger pads. Is that just me? After that, it’s purely capricious all the way. There’s a perfectly made scotch egg that has the pork replaced with white crab meat. The yolks are running and there is a large spoonful of glittering caviar to make sure it’s properly dressed for the occasion.

Duck eclairs are pretty well described: slices of crispy peeled choux pastry rolls are split and filled with crushed, salty duck confit and glazed with a jus and then decorated with edible flowers. There are three of us at the table and three eclairs on the plate. I ask if it’s the normal part. I was told the standard serving size is two, but if three people happen to be seated at the table, they send out a third. They do the same with the lobster donuts, which are in fact deep-fried donuts filled with mayo-bound lobster and dusted with beetroot powder. Do I have to tell you that they are both delicious?

Desserts bring the only backfire. In a bakewell slice, the cherries have been replaced with beetroot. This doesn’t make it a better Bakewell, or even an intriguingly different Bakewell. It just makes it weird and disappointing. Beetroot may be sweet, but it can still have a plant-like, musty edge that the golden beetroot on the plate is pointing to. Far better is an extremely well-made lemon meringue cake with toasted meringue tips and fat spherical pearls that burst with a sweet, lemony syrup, the essence of a sorbet dib dab. 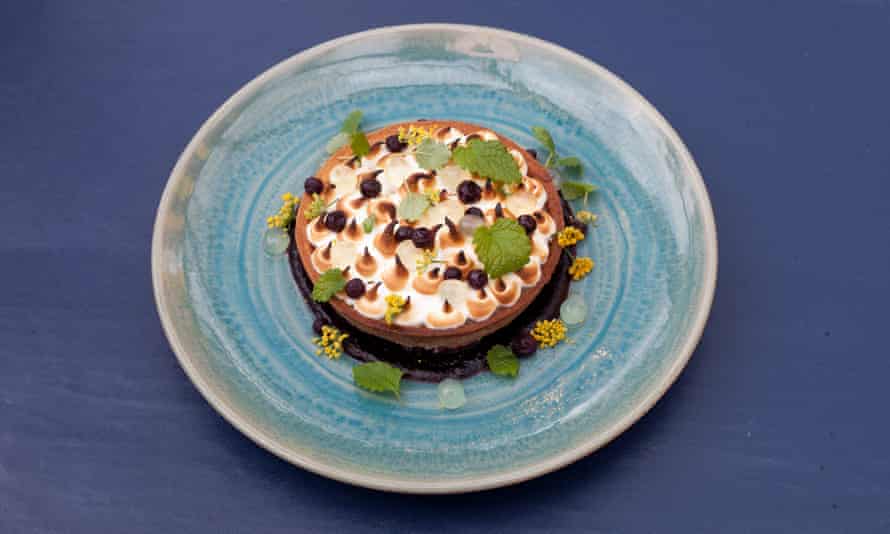 Did the repeated mismatch between the name and contents of the dish, the naughty twist of it all make your palms itch? Because of me. I understand. But I point out to you how seriously I have taken this cooking, because despite all this whimsy, it deserves to be taken seriously. Only food and courses are careful exercise in misdirection. But it’s sweet and kind. Duck eclairs and lobster fritters are also made. How could anyone seriously complain about this?

Chef and restaurateur Mike Robinson, known for the playful Harwood Arms in London, is opening a third restaurant in a newly opened Indigo Hotel. After Woodsman in Stratford-upon-Avon and The Elder in Bath (which I discussed last summer) follows The Forge in Chester. It starts next Wednesday, May 19th. The opening menu includes a forest pigeon salad with bacon and black pudding, a grilled pile of fallow deer and a cherry bakewell souffle. At theforgechester.com.

Chef Mark Greenaway, who has made a name for himself in a number of well-received Edinburgh restaurants, has branched out into cakes and porridges. Greenaway’s Pie and Mash’s first outpost recently opened on Villiers Street next to Charing Cross Station in London. Cake options are £ 6 each and include a short rib with pearl onions, a confit duck with lentils and orange, and a vegan ground beef with red wine and rosemary. Toppings, including porridge, pea mash, gravy, and parsley liquor, cost around £ 1 extra. Visit greenawayspies.com.

Nico Simeone, the head chef of a group of tasting menus called Six by Nico in Edinburgh, London, Belfast, Manchester and Liverpool, will open a second company in Glasgow. All profits go to the Beatson Cancer Charity. Beatson West of Scotland Cancer Center treated Simeone’s wife Valentina when she was diagnosed with non-Hodgkin lymphoma in 2015. Beat 6 opens in late summer and like their other restaurants, serve a themed tasting menu that changes regularly. See sixbynico.co.uk.

Poor Decorating on my own Home

Man living in woods behind Tesco threatened to ‘karate…